“Illusion is the first of all Pleasures.”

What is she thinking about, it makes you wonder if her disillusion – as depicted in this painting – could actually be an illusion in itself. A trick of the mind that causes this emotion inside, a feeling of sadness and disappointment. I so wish it could be true…

and was painted by Paulus Bor. Bor is a Dutch painting that born and died in Amersfoort, a descendent from a notable Catholic family. His works were marked by a classicism and were considered strange because of the mysterious subjects. He used a rather primitive technique and made use of unusual compositions. 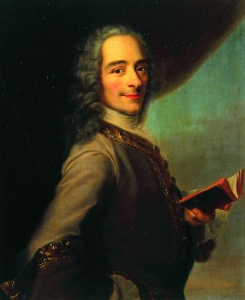 This is a portrait for Voltaire. His real name was Francois-Marie Arouet. He was born on the 21st of November 1694 and died on the 30th of May 1778, was a French Enlightenment writer, historian as well as a philosopher…

Voltaire was well known for his attacks on the Catholic Church and his continuous support for freedom of religion, freedom of speech and a separation of church and state.

THE SIMONE DE BEAUVOIR EFFECT “I am incapable of conceiving infinity, and yet I do not

You Say
write a review
Nona Rostagno, Brasil
Monique, I’m very glad to have my works in your site. I always read you interesting posts, music and specially your poems, which are beautiful, but any way sad, because the poet is a beautiful, brig...
Pradip Balsaraf, India
Thanks Monique once again. It\’s simply awesome…..I simply appriciate your choice and point of views a lot.I am great fan of Art & Literature.You seems to be great inspiration for us. Keep posting...
Rosa Lapinha, Portugal
Verdadeira e sentida a paixão pela Arte!…
genuine and heartfelt passion from art
I feel it
read all reviews >>

Latest from The words that make sense... brilliant writings by writers...

“I am a writer and I want to write.” ― Jane Bowles
A QUOTE BY JEAN DE LA FONTAINE “L’absence est le plus
Federico Garcia Lorca “Let there be a landscape of open eyes and
What does the American writer James Baldwin think about reading?… “You think
Some quotes by writer Simone de Beauvoir (1908-1986) “I wish that every
Go to Top