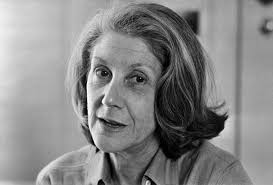 “Truth isn’t always beauty, but the hunger for it is.”

Nadine Gordimer was a South African writer, political activist and recipient of the 1991 Nobel Prize in Literature. She was recognised as a woman “who through her magnificent epic writing has – in the words of Alfred Nobel – been of very great benefit to humanity”

She was one of the most prominent literary voices for political freedom and racial equality in South Africa.

You Say
write a review
Nathalie Dupouey, France
I love so much your fantastic world !
Pradip Balsaraf, India
Thanks Monique once again. It\’s simply awesome…..I simply appriciate your choice and point of views a lot.I am great fan of Art & Literature.You seems to be great inspiration for us. Keep posting...
Rosa Lapinha, Portugal
Verdadeira e sentida a paixão pela Arte!…
genuine and heartfelt passion from art
I feel it
read all reviews >>

Latest from The words that make sense... brilliant writings by writers...

“I am a writer and I want to write.” ― Jane Bowles
A QUOTE BY JEAN DE LA FONTAINE “L’absence est le plus
Federico Garcia Lorca “Let there be a landscape of open eyes and
What does the American writer James Baldwin think about reading?… “You think
Some quotes by writer Simone de Beauvoir (1908-1986) “I wish that every
Go to Top