I was still little when I saw this painting called “Girl with Peaches” for the first time.  I found it while looking onto one of the wonderfully bonded  art books my aunt collected. This particular one was filled with Russian Painters, mostly from the late 18th and early 19th century. My aunt lived alone in her Paris apartment. But my parents and I visited her regularly, at least a few times a year at that time. It was a long drive, 7 hours at least but as a child that didn’t matter you always found a way to entertain yourself.  Of course I spent many hours reading books.

My aunt – unfortunately she is no longer among us – not only did she have the most amazing library of books, she also had so many beautiful paintings hanging on her walls .But there was one particular painting that I spend most of my time on. I could not stop looking at it. There was just something magical about it to me.

I am talking about an impressionist painting picturing a girl that is sitting all alone at a table with this look in her eyes like she was asking me to sit down with her and have a nice conversation. Maybe we could even become friends? I would have loved that. There was something about her that made me want to step into the painting.

One day my aunt was apparently standing in the hallway and stood there watching me looking at this painting. She snuck up behind me and gave me a hug. Do you know this is my most favorite of all paintings? she said, and it’s not even an original. The name of the original work is “Girl with peaches” painted by Valentin Serov, a Russian painter she said. It turned out my aunt had commissioned a reproduction of this painting because it reminded her so much of her time as a kid. She hadn’t had a very happy childhood and she talked about the many different faces of the girl. Either one of sadness, a deep longing to run away, away from that place that is boring and uninspiring. Or is it the face of a girl being naughty, thinking of pulling a trick, eating the peach that she shouldn’t and trying not to laugh… To my aunt it resembled the duality of situations in life. 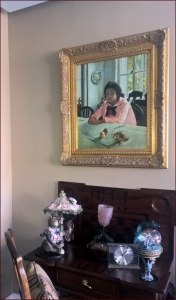 All these years later I still have her art book- the original reproduction of Girl with Peaches got lost unfortunately – and recently when I came across the book again I looked up the picture and decided to write this article.

Interested in having your own, click here for more info: Reproduction Oil Painting of Girl with Peach Valentin Serov 1887

So who actually is  Valentin Alexandrovich Serov

Well to start of with he was a Russian painter born on January 19, 1865 – December 5, 1911  in St. Petersburg. Valentin was born in an artistic family, the son of a famous Alexander Serov who was remarried with Valentina Bergman also a composer. She came from a German-Jewish backing.

Valentin Serov studied arts during his childhood in Paris as well as in Moscow under Ilya Repin. Later on, he moved on to study under Pavel Chistyakov during his time at the St. Petersburg Academy of Arts (from 1880 to 1885).

Serov’s early creativity was sparked by the realism in the art of Repin and the strict pedagogical system that Chistyakov applied.

His portraits became the greatest works of Serov’s early period. “The Girl with Peaches” painted in 1887 and “The Girl Covered by the Sun” painted in  1888 are the two most stunning examples. Both paintings today can be found in the Tretyakov Gallery in Moscow.  Valentin Serov depicts the spontaneity of both model and its environment. Through the use of light and color, a complex harmony of reflections, the sense of atmospheric saturation and the fresh picturesque perception of the world in the painting the first signs of the early Russian impressionism become visible.

This is how and why The Girl with Peaches can be defined as one of the, if not the painting that inaugurated Russian Impressionism.

When I started my company Passion for Paintings in 1997, one of the first painters we made was another reproduction in oil of that special painting for me…and since then it is hanging on my wall, going with me everywhere from Belgium to Spain, from Spain to England and so on.

I really love my girl with peaches!

You Say
write a review
Nathalie Dupouey, France
I love so much your fantastic world !
Alyssa Agas, Phillipines
I feel honored to have my work in your site because that is where real and talented artists is. It\’s really honorable to have my work there
Rosa Lapinha, Portugal
Verdadeira e sentida a paixão pela Arte!…
genuine and heartfelt passion from art
I feel it
read all reviews >>